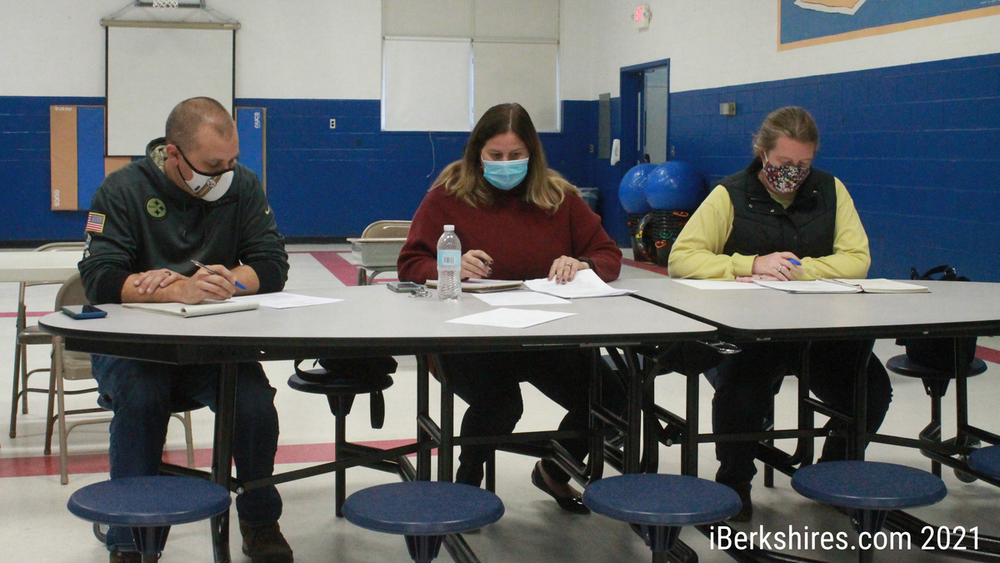 CLARKSBURG, Mass. — The Clarksburg School Committee on Thursday gave the administration the green light to look into instituting a vaccination policy for staff at the school.

Superintendent John Franzoni told the committee he has had preliminary conversations with the district's counsel about creating a policy that would require weekly testing for any staff members not vaccinated for COVID-19.

"You can transmit it whether you're vaccinated or not, but it's certainly more prevalent when you're not," Franzoni said.

"In each of our districts (of the Northern Berkshire School Union), we have a very small number of unvaccinated individuals — one to three that I'm aware of. In each school, we've had issues with COVID that have involved someone who is not vaccinated. My first job each day is to keep everyone in the school safe. That's changed the last 18 months ... but this is a big part."

Franzoni said the district would need to purchase the rapid testing materials to test any staff members who fall under a new policy. He offered to find out some numbers on the potential cost and bring it back to the School Committee at its December meeting.

He also said he would talk to the school's union representative to see whether it had thoughts about a potential policy.

The School Committee indicated that — pending information on the fiscal impact — it sounded like a good idea.

"I come from a job where I'm mandated [to be vaccinated]," Cynthia Brule said.

"We haven't made that decision, but we test our employees frequently," Eric Denette added. "It does seem sensible to do weekly testing for people who aren't vaccinated, but it's hard to make that decision without budget numbers."

Principal Tara Barnes said she would gather updated information on the vaccination status of staff members through voluntary disclosure to get a better idea how many people might fall under a prospective policy.

Barnes brought the School Committee a mixed bag of information about COVID-19 issues at the K-8 school.

The bad news is that the small school had had seven positive cases since Monday among students and one among staff. It appears that many of those cases were acquired outside of school, Barnes told the committee.

On the other hand, a "test and stay" program instituted by the Department of Elementary and Secondary Education this year has allowed 17 students who are close contacts of people who have tested positive to stay in school and test daily rather than stay home.

"You still have to quarantine when you're outside of school," Barnes explained. "But we allow you to be in school during testing and quarantining because we have all the protocols here."

In addition to requiring face coverings, the school also has social distancing practices in place and has enhanced ventilation measures to help reduce the risk of spread in school.

Barnes emphasized that "test and stay" only applies to asymptomatic pupils. Any children who show symptoms of COVID-19 still are encouraged to stay home and get tested by their doctor.

"We wouldn't want someone sending their student to school for a test because they had a fever last night," Barnes said.

The best news on the COVID-19 front is that the FDA has approved vaccinations for children aged 5 to 11, and Barnes said she already is seeing evidence of interest among families.

"I was in the pediatrician's office today, and they said they did 150 shots last night and had plans to do another 150 today," she said.

Clarksburg Elementary is planning a COVID-19 vaccine clinic for pupils on Friday, Nov. 19, from 3 to 5:30 p.m., Barnes said. Franzoni said he understands a second clinic is in the works for mid-December.

"One thing we'll add to the commissioner's letter [going out to families this week], is that if you are fully vaccinated and symptom free and you have a close contact [with an infected person], you don't have to quarantine anymore," Barnes said.

Sending such messages to families will be even easier going forward as the Northern Berkshire School Union rolls out a new app, Franzoni told the committee.

The union applied Elementary and Secondary School Emergency Relief, or ESSER, funding to develop the app with Apptegy, an Arkansas-based school marketing and website compliance firm.

Franzoni said the app will help the district get out information about meetings, events and snow days. As part the contract with Apptegy, the school also is getting an improved website, he said. Families interested in the app — which won't go live until this week — can download it now by searching NBSU in their app store, he said.

In other business, Franzoni reminded the committee of a joint meeting of NBSU school committees on Monday at Abbott Memorial School in Florida. At the meeting the officials will be discussing, among other things, overtures from the Hawlemont School District about joining the NBSU. Franzoni said he has informed Hawlemont officials that a merger likely would be considered by NBSU only after a feasibility study.

"We need to slow this down and look into all options and what the ramifications would be if we added another district," Franzoni said. "It would involve hiring more staff. It would mean taking on another district that would instantly be the second biggest district in the school union."